Last week's warm weather in England has reminded me of the summer of 1976 when we had a heatwave that lasted months. See: http://billblogs2.blogspot.co.uk/2016/07/summertime-1976.html
This endless summer and Californian climate must have had an effect on everyone. The Beach Boys "20 Golden Greats" LP, released in June of '76, topped the UK Album chart on July 24 and remained there for 10 weeks.
But we've heard all those Beach Boys hits, so (here comes the link) in the spirit of it's lyrics, I've picked a song from the same year: "Long May You Run" by the Stills-Young Band.

The song is actually about a car. A 1948 Buick Roadmaster, to be precise, Neil Young's first car.
* For me in 1976, little did I realise, 'rolling down that empty ocean road' was real and would soon be happening to me.

Weeks and weeks of blue skies, warm evenings and mediterranean weather you could rely on. Glorious!
At least that's how I remember it. Searching reports for the facts reveals a preoccupation with the high temperatures of the heatwave and the resulting drought and water shortages. 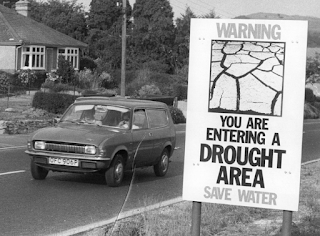 Due to the lack of rain there was even a Minister for Drought appointed (Denis Howell). A brown and yellow landscape appeared across the country. 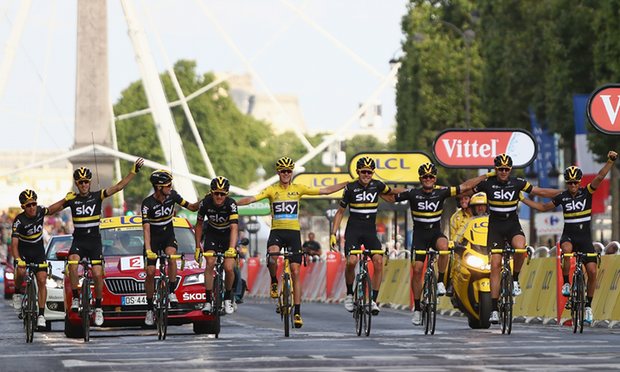 It's been quite a few weeks watching Chris Froome win the 2016 Tour de France with yesterday presenting another of those fantastic shots as the entire Team SKY rolled over the line as one.
The team effort and tactics has been great to see on a roller coaster of a race, with Chris Froome having run up mountains, bled through his yellow jersey and borrowed bikes, not to mention catching everyone out by racing down the descent of the col de Peyresourde on Stage 8 in the Pyrenees. Riding as fast as he could, like he was a kid again and Team Manager Dave Brailsford saying 'who saw that coming', were my moments of the tour. More here.

Along with Mark Cavendish winning 4 stages and Adam Yates taking the white jersey for best young rider, the first ever British winner, it's a brilliant time for British cycling.

As promised - that 3rd commercial during our break.
Click on this link to watch the ad: https://www.youtube.com/watch?v=h20VEwyQSA0
This McDonald's ad for Flavoured Wraps, has the musical background dialogue supplied by The Buzzcocks with 'What Do I Get'.

I'll be taking a short break after today. But If everything goes to plan I'm still hoping to post the
MUSIC SPOT  as usual.
There are a lot of TV ads right now that feature some great music. I've noted down three of them and have them lined up ready to air. Call it my 'Commercial Break' if you like:

First up is the GoPro commercial that uses The Ramones 'Blitzkriek Bop' - click this link to watch the ad: https://www.youtube.com/watch?v=B65k3Mq0MB8
Listen to the full song, on YouTube, here:-
Then there's the UBS Swiss Bank ad: click https://www.youtube.com/watch?v=iBXGNkn5Wfk This ad features the song 'Hero' by Family of the Year.
Complete song (with some nice animation) right here:-

Now the eagle-eyed among you will have spotted I mentioned 'three' ads and this is only two. Call this part then my 'View 2 get 1 FREE' offer. The 3rd commercial will be next week. Tune in then… 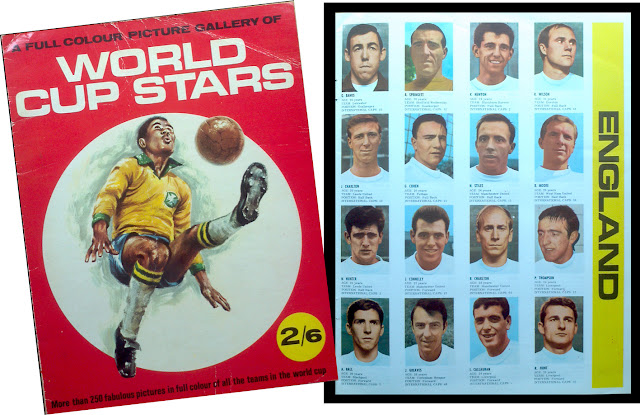 The England page from a 16 page booklet containing all the teams competing at the 1966 World Cup. The page format allows for only 16 players from each squad to display and the powers that be in setting this up decided Geoff Hurst and Martin Peters would not feature !

Like all this memorabilia ? There's an exhibition just opened at the National Football Museum at Wembley Stadium http://www.nationalfootballmuseum.com/whatson/1966  On until next year and appears to be FREE entry.

50 years ago, last night, the 1966 World Cup kicked-off in England. 16 teams competing over three weeks at eight venues across the country. Expect further bits of memorabilia over the coming weeks. 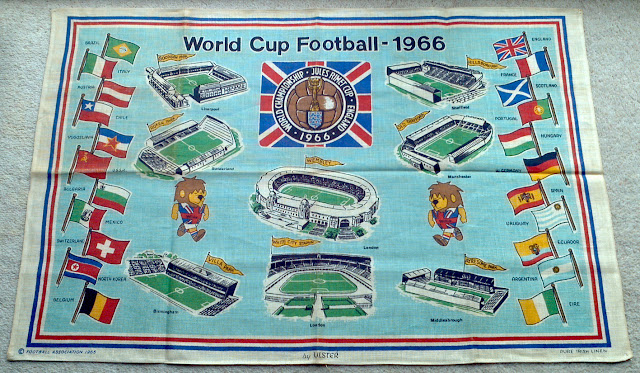 A great weekend for the British, made for a very welcome change.
Lewis Hamilton winning the British Grand Prix - Chris Froome takes over the yellow jersey at the Tour de France - & Andy Murray wins Wimbledon. A hat-trick of smiles from me, great stuff!

While on Sunday evening the European Championships in France concluded with a dramatic victory for Portugal in extra-time. In a rather dull final, against the hosts, most of the drama came in the shape of Cristiano Ronaldo. Injured in the 7th minute he twice tried to continue before being sub'd. Ultimately appearing, animated and agitated on the touch-line after Portugal had taken the lead with 11 minutes remaining, to encourage his team mates to an unexpected first triumph in this competition. Congratulations Portugal, I don't know how you did it ?

And finally
I'll leave you with my pick of a TEAM of players I'd not heard of before Euro 2016: I've gone for an Italian inspired 3-5-2 formation, here's - My Team of Unknowns 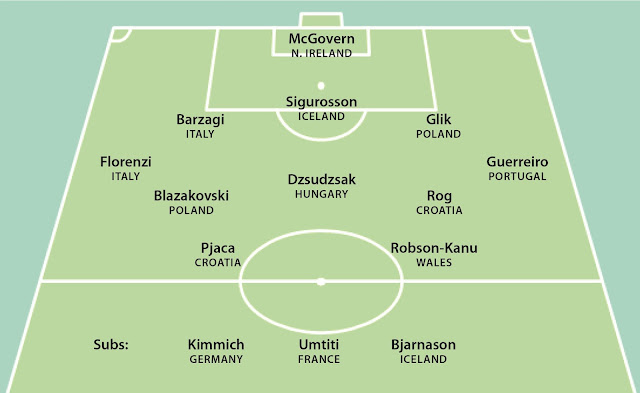 It's 1978 and I'm in a wine bar in Wimbledon Village. The music playing has caught my attention and by the time of the guitar solo on track three I'm up at the bar asking the person serving "Who is this we're listening to?"
The LP cover, they showed me, was 'Close Personal Friend' by Robert Johnson. Not, it has to be said, an album or an artist that sold millions of records. In fact finding Robert Johnson has been a problem. If you 'google' him you understandably get the famous blues singer instead. Even searching for my copy of his LP caused me to look through my entire record collection without success and only on a second sweep did it come to light.
I have unearthed some of his music on YouTube, though it is rather patchy. I found the excellent 'Guide My Energy' track mentioned above but the sound was pretty poor. Most videos are just stills of the album cover, while the one I've actually picked is not even that exciting. It's 1978 again, just listen to Robert Johnson and 'Wish Upon A Star'. The riff reminds me of something, but can't quite think what it is…


There's another track on this great LP called 'Leslie' that has a part that sounds very like The Shadows 'Apache'. No matter, it's all good music.
Robert Johnson did make an appearance on 'The Old Grey Whistle Test' in 1978, albeit filmed in Miami, so if you want to see and hear him click: https://www.youtube.com/watch?v=47fXsqz8_78

Stage 5 today > the first of the mountains > which'll cause a shake up to the General Classifications. So far we've had Mark Cavendish in yellow and winning another stage to equal Bernard Hinault's 2nd place of all-time stage wins. A good excuse to post the picture I luckily captured of the 'Manx Missile', flying past us during the 2012 Olympic Road Race, in Richmond Park.

When your luck is out !

Spare a thought for Northern Ireland's jockey Chris Meehan. Riding in Italy he was dismounted by his horse and kicked in the face. Meehan was knocked-out, his nose broken and a gash in his jaw required stitches. But while recovering the ambulance arrived to assist him, backed up and ran over his leg and broke it. "It sounds like a plot from a slapstick sitcom" reported the Racing Post.

Semi-final night in France for the Euros. All eyes on Wales.

I often note down certain songs I've heard and then plan to tie them into key dates or occasions as they come up. About a month ago I heard this song on BBC radio 6 and it reminded me of my son's band - Crisis Journey ©2008
Scott is in England this week - on route to the Rio 2016 Olympics - so this week's track is for him > and of course anyone else you cares to listen.
Graham Coxon, was lead guitarist and a founding member of the group Blur. This song 'Freakin' Out' is from his fifth solo album "Happiness in Magazines" and was a single release in 2004.