I wouldn't mind betting there are those amongst you that have doubtless lost track of the days over recent weeks and have welcomed the arrival of my FRIDAY MUSIC SPOT, not just for the musical distraction but that it swiftly enables you to identify that the good old weekend is about to begin.
Hopefully you have also allowed yourself, as you click the link, a moment to wonder if this weeks jolly ditty would be a much loved long forgotten favourite or whether (as is often the case) something new was about to descend upon you and take your fancy, much in the way it did mine.

Which brings me, without further ado, to this week's Star Tracker, an artist that is in part both of the above options.
Chris Rea is a name you doubtless know, yet his music remains, for me at least, largely uncharted territory. Not that his records have actually 'uncharted' - 72 singles: 33 hits and 24 albums, two of which have been UK No.1s. And while this recognition has repeated itself in Europe, especially Germany, I can find very little evidence of much success in America. Even the yuletide perennial 'Driving Home For Christmas' single, which hits the road (and the UK charts) every December appears to have never actually left the parking lot in the US.
So something familiar and new coming up. Originally released in 1983 "I Can Hear Your Heartbeat", a three and half minute song, became a longer live track, with some nice solos: piano, fantastic slide guitar from Chris and saxophone ending. Taken from a German TV show recording:


This track would evolve over the years and a 'live' show from 2006 reveals an even longer and different version - almost a 'jam', minus the sax solo - plus Chris Rea's 'strat' is now older and a bit beat up. Worth a comparison > www.youtube.com/watch?v=pRK6QpajpXQ

Further recommended listening > 'Dancing with Strangers' 1987 album. Contains 'Let's Dance' among many more. And those UK No.1 albums: 'Road To Hell' & 'Auberge'.

This weeks headline grabbing intro is:

Right, now I have your attention get ready for a double video spot. First one is Paul Rose, playing solo with some clever overdubbing, the other is a band version of the same song "Home", lasting a bit longer. I couldn't decide which I preferred, so here they both are, you pick.


The headline has a link for more info on Paul Rose. Because if you just search his rather un-rock 'n' roll name you get all sorts of different people from a TV presenter and explorer to a screenwriter. 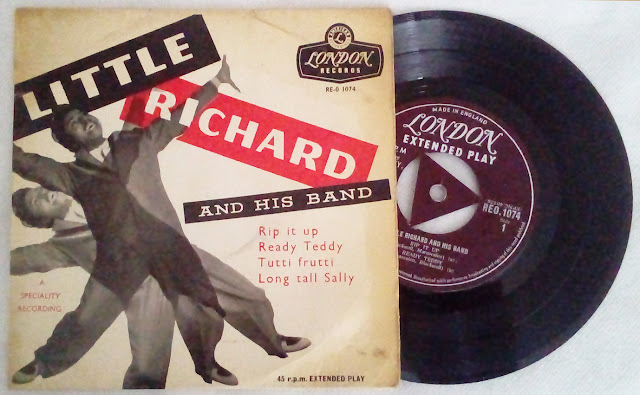 Little Richard EP. That belonged to my parents.

> Little Richard who died a few days ago. Revisit his FMS here: 'Tutti Frutti'
Given that parents were supposed to dislike rock 'n' roll music, is this a sign of a misspent upbringing? You decide.

Continuing the 'live' concert performances of late, here's another. This one came with a strong sense of deja vu when I heard the track a few weeks back and sure enough I had noted it down last year when I first came across it.
Reese Wynans may not be a name you're familiar with and in fact this song is from his first ever album release with his name on it. But he is a Rock 'n' Roll Hall of Fame member and has a 50 year career and a history of playing keyboards with a 'who's who' of music.
Joe Bonamassa for one and on the album version of this song it features no less than 7 different vocalists. For this 'live' show there's five: Paulie Cerra (1st), Noah Hunt (long hair), Jimmy Hall (hat), Juanita Tippins (1st female) and Sinead Burgess (long haired female), along with Joe B and Josh Smith on guitars.
It really is Reese Wynans & Friends: enjoying themselves > 'Sweet Release'

A short while back we had some Portuguese lyrics, today I have some Italian for you.
From a Pavarotti and Friends 1999 concert, el legendario cantante y compositor B.B. King on stage with Italian singer-songwriter Zucchero Fornaciari or simply Zucchero for a version of his composition 'Hey Man (Sing a Song)'.
Hang together ...

There's another version from some years later with another old geezer called Eric Clapton. Mostly in Italian, but worth a spin: www.youtube.com/watch?v=S10wohhv_RQ 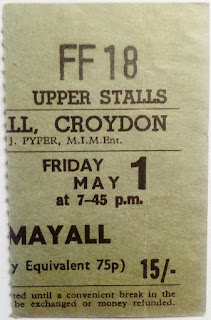 On this day, 50 years ago, by virtue of one half of a ticket stub I can tell you exactly where I was that evening. (see pic). I was sitting in the Upper Stalls at the Fairfield Halls in Croydon enjoying John Mayall & The Bluesbreakers, for the princely sum of 15/- (75p in today's money).
The father of British Blues John Mayall is now 86 years old, still performing and in 2003 celebrated his 70th birthday with a special concert. Earlier this year I picked up, in a charity shop, a CD of that night, for a similar ridiculous sum of money.* It's a double CD too and full of incredible music and guest artists from down the years of Bluesbreakers: Eric Clapton, Chris Barber and Mick Taylor.
I could therefore select any number of tracks from this concert (most of which are available on YouTube) and had already earmarked 'Blues for the Lost Days' before it became appropriate for this time.
So pull up a front seat for a near 12 minute treat, with solos from (in order): Tom Canning organ, Buddy Whittington guitar & finally Mick Taylor playing guitar, in his usual understated way.

With so many great tracks accumulated over recent weeks, it's difficult to know where to start. At the beginning would therefore make the most sense, so here's one of the first tracks I noted down.
The group Playing For Change was not a name I was familiar with. Their mission is simple:
- a movement created to inspire and connect the world through music (playingforchange.com)
Usually playing in far more informal surroundings this video is from a concert in Brazil, during the 'Peace Through Music World Tour' in 2014.


"There are moments when music transcends the darkness and shows us the light.          This is one of those moments."

Time for Playing For Change and the timeless 'Stand By Me'

Interestingly I had set up this track way before I went away. So I'm going to go with it now.
Talking Heads and a Wild wild video with the ever eclectic David Byrne from the 1986 movie 'True Stories' - 'Wild Wild Life'

> You wont be surprised to hear I have been accumulating loads of great tracks over the recent 'lockdown' period. These will be with you once I've got my head on straight.

We have a number of dvds here to pass away the time. One being the 2005 Cream reunion concert from the Albert Hall.
"Rollin' and Tumblin'" was an original Hambone Willie Newbern 'Roll and Tumble Blues'. A newer version by Muddy Waters was the track covered on Cream's first album 'Fresh Cream' in 1966.
Here is the 2005 concert version nearly 50 years after their debut. Jack Bruce (harmonica), Ginger Baker (drums) and Eric Clapton (guitar). Cream >

The lyrics to this song are clearly not about any form of social distancing !😉

Forget the wretched virus, let's remember Bill Withers.
The news of his death at 81 years old filtered through eventually last week.
Among many great songs there's none better than this one. "Lean On Me", released in 1972 is this week's Star Track.