Geographically Australia and New Zealand are close. Well at least in world terms. Around 1340 miles as the crow flies.
No surprise therefore to see Aussie things washed up on New Zealand shores. Holden cars, Arnott's biscuits, Bundaberg drinks and less welcome the brushtail possum (a real pest).
It was great though to hear some of the Aussie bands that I loved from the 80s: Midnight Oil, Men at Work, John Farnham and this feller Jimmy Barnes.
The video for his 1987 track 'Driving Wheels' contains these freight train trucks that thunder down the roads of New Zealand, hounding you. Pull over and get out of their way, if you can, they're another pest!  Best pull in and listen

Kicking up some dust with some great squealing guitar is the aptly named Johnny Diesel, aka Mark Denis Lizotte.

This needs little introduction....
As promised the final 'Bardeaux' track: Eric Clapton wrote and performed this song 'Old Love' with Robert Cray. It's from his 1989 'Journeyman' album, not to be confused with a track on the same LP called 'Bad Love'.

If you want to save this until later in the day, feel free, because today I'm inviting you to join us in a bar in Queenstown, on New Zealand's South Island.

Having taken refuge from the afternoon's heavy showers, it's time for drinks (pour yourself one if you wish*) and time to enjoy the moment.

We're back in the comfortable lounge of Queenstown's 'Bardeaux': (described as)
"An iconic bar and the perfect intimate venue. This sumptuous up-market venue is all about service, the huge open fire, knowledgeable staff and great music".
And great music there was too. With the assistance of my trusty phone app 'Soundhound' I was able to identify all the music played.
*Listening to them all may depending on the size of the drink you poured yourself ! You choose.
First up is 'Everything I Need' by Keb 'Mo' from the blues performer's 1998 album called 'Slowdown'. (click here to listen)
This was followed by The Robert Cray Band 'Bouncin' Back' featuring the Memphis Horns
(click to listen)
Completely in the mood now (sip of beer) the next track was also Robert Cray on a more recent recording of 'The Same Love That Made Me Laugh', an old Bill Withers composition, and single from 1974. The band on this album is Hi Rhythm and it was recorded in the legendary Royal Studios in Memphis**. This song is today's 'Star Track'. Very tasteful guitar, that fades out to just a drum beat. Unusual ! Cheers

**The 2017 album is a handful of originals and a collection of covers including two Tony Joe White songs, who actually joined him in the studio.


I've another one from the 'Bardeaux' session… on tap/hold for next week....

I'd been warned that the craft beer scene in New Zealand was going to be intoxicating. It certainly was a great diversion. Aided and 'topped-up' from day one by Tim Newman, who offered tips and advice along with bottles and glasses of some choice brews.
Monteith's
This was my opening draught. A 150 year old brewery from Greymouth on the West Coast of South Island, with a selection to boggle the mind of any beer drinker.
No way did I get round to tasting them all, but had fun trying. Favourites:- Original Ale on draft; the Highway 6 IPA (Hwy 6 passes through Greymouth); Double Hopped IPA (pictured below) and 'best beer name' being their Red IPA called RIPA.
Moving onto the South Island and shopping in the supermarkets I discovered beers from BRB Boundary Rd brewery way back up in Auckland. Their New Zealand Double IPA at 7% was my best buy here. Just one of these at a session, I'd say a recommended dose. 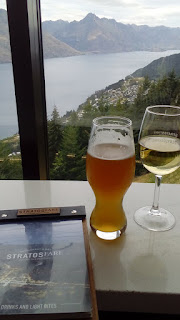 Altitude
Queenstown had lots of local beers, (and a tour bus trip) including the Altitude Brewery. We had drinks at the Stratosfare Skyline bar with an amazing view (see pic). I had a Wheat beer called 'Persistent High' on draught and they also brew an IPA called 'Mischievous Kea', after the cheeky New Zealand alpine parrot.

I'd been told Speight's was the beer everywhere on the South Island, but I found this to be fairly bog standard.
Continuing round South Island I missed the Wanaka bar 'Kai Whakapai' ('Wh' is pronouced as an 'f' - truly), and the Beerworks Brews.
Then the timing wasn't right for the famous Historic Empire Hotel in Ross and finally the brewery tour at Monteith's was bypassed, which was just as well as I had to take over the driving soon after Greymouth.

However in Hokitika, in the museum, I heard a song with the lyrics:

So I'm holed up in Hokitika
Living on white bait and Monteith's bitter
The song's called 'Karamea Cowboy' and I found a version on YouTube by a group named Hot Club Sandwich. If you want some music while you read on click on the arrow ⏩ . Name dropping places in New Zealand along the way.


Back to North Island and Wellington was full of opportunities. And some wonderful names.


Garage Project
Then there was the Garage Project and their Pills 'n' Thrills an irreverent take on the classic Bohemian Pilsner. German malts combined with American Summit hops. A real winner. 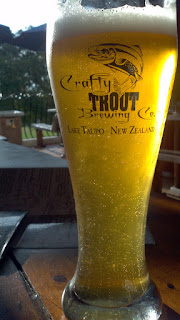 Crafty Trout
One of Lake Taupo's drinking attractions. Great selection on tap. This brew pub (kafe) is fashioned to resemble an alpine lodge.

Croucher
Based in Rotorua, Croucher have a some entertaining beer descriptions on their website: i.e. ENDURO PALE ALE, 5%

Packed full of New Zealand hops, the Enduro Pale Ale is a bit like launching yourself down the Rotorua Redwoods at near terminal velocity while eating fruit salad on weetabix. We don't suggest doing that - but we do recommend savouring the smooth, lingering finish of this new world best bitter beer.
Drink responsibly, wear a helmet. 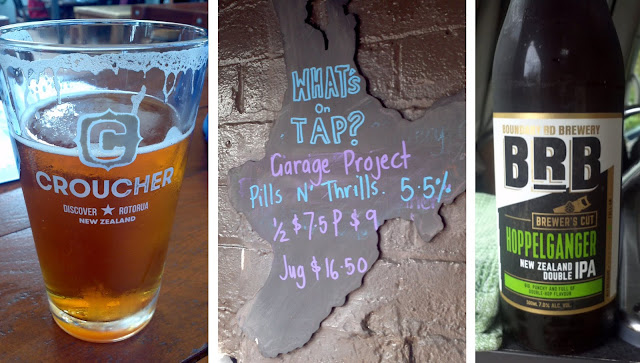 Some of these New Zealand beers are actually available in the UK. Not cheap mind, though not crazily expensive either. See:
www.beerhawk.co.uk/browse-beers/browse-by-country/new-zealand-beers?p=1
& shops > www.webroughtbeer.co.uk/we-brought-new-zealands-finest/

Bit of a Country theme this week (see Midweek Spotlight below).
Another track found on the plane ride home (just like last week). American country music singer Brad Paisley's album, 'Love and War' released in 2017 included collaborations with Mick Jagger and John Fogerty among others. A single off the album 'Last Time For Everything' has some great guitar playing and a definite rock feel to it.

However I have little idea what's going on with the video, which is strange. Out of sequence clips spring up from nowhere and then David Hasselhoff and KITT the car turn up for no apparent reason. Lyrics have 1985 timeline references... might explain something?
Great track though

Here's a good story:
About two weeks ago we booked into our airbnb accommodation in a town called Thames (roughly 120km east of Auckland on the Coromandel peninsula).
The contact there was a Bruce Greaves, who his profile said was a builder... among other professions, as it turned out.
Margaret got chatting to him and he asked her if she liked Country & Western music as he was a singer, adding modestly "google me" ! Naturally that's what we did. Briefly:
"Bruce Greaves (Actor, Extra, Model, Singer, Guitarist) is the eldest son of the iconic Rusty Greaves (one of 10 sons actually!). Bruce has cut his teeth as a country singer in a great family whose tradition is country. A huge voice, including the ability to yodel gives Bruce that authentic kiwi Country sound. Also has his own building Co. - building new houses and doing renovations"
(None of this was known to me) Click here for the full story. And here for Rusty Greaves the first overseas singer at Nashville's Grand Ole Opry.
Bruce gave us a few CDs (which are available on Amazon and Spotify). Listening to him he certainly likes a ballad or two (a la Jim Reeves) and also does a very passable Johnny Cash. Yet the best thing is he has a very good backing band, so lots of nice pedal steel guitar, fiddle and banjo going on.
There was a Country music festival in town that weekend, which we couldn't stay for but having heard some of the tracks over the internet we said we'd spread the word. Consider that done ✓.
But I haven't mentioned his big international hit - "number two on international charts" Bruce said, called 'Travelin' Man'. It's on YouTube (basically a video of him looking cool in his hat, playing over a backing track) a song written by Nashville hit songwriter Tommy Barnes, and here it is:

Definitely well worth 2.49 minutes of your time is the Country Rock 'Cold Night in Wanaka'