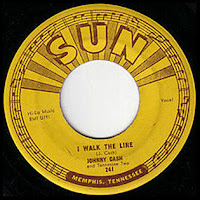 Sixty years ago (this Sunday) on the 1st May, 1956 Sun Records in Memphis released "I Walk The Line" by Johnny Cash.

It would spend six weeks at the top of the U.S. Country Juke Box charts that summer, and then reached number 17 on the Billboard Hot 100 music charts.
Today's video is from the famous concert recorded in San Quentin jail in 1969. By the time of this concert "I Walk The Line" had sped up quite a bit from the original, which I prefer. 1969 was probably when I caught up with this song for the first time, because I'm sure it wasn't in 1956.
Look out for additional footage added to the end.


You wait weeks for a 1950s record and then two come along, back to back… 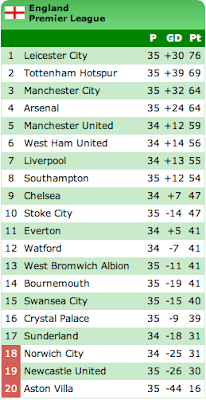 It's now a two team race for the Premiership - Leicester City or Tottenham Hotspur ?
But after last night's game saw Spurs draw 1-1 with WBA you could see their players faces felt it was now a very tall order. Leicester City - the 5000-1 outsiders for the title at the start of the season last August - are just one win or three points away from their first ever League title. Or in other words with just 3 games and 9 points left to contest, Spurs, who are mathematically 7 points behind, require Leicester to crumble in a way people have been expecting and predicting for months and yet simply hasn't happened.
Five different teams have been top of the table this season, but only one team since the end of January - Claudio Ranieri's Leicester, flipping' City!
All eyes turn to Old Trafford for next Sunday's match involving the Foxes, with the Chelsea v Spurs game Monday night another potential title decider.

After posting last week's Top Twenty chart, a mate remarked "Some 'poptastic' stuff in there". This immediately made me think of Smashie and Nicey (aka: Paul Whitehouse and Harry Enfield as Radio Fab FM's superstar DJs). 'Poptastic' was one of there catchphrases, as was "Pop a doodle do' and I seem to recall they also said 'A-wop-bom-a-loo-mop-a-lomp-bom-bom!' And if they didn't, then they should have !
Which brings me to today's other tenuous link. My Top Twenty had tracks covering 6 decades, but nothing from the 50s. Last weekend BBC4 re-ran their Rock 'n' Roll America series and they showed this clip of Little Richard singing 'Tutti Fruiti'. Rolling Stone magazine in 2012 declared that the song "still contains what has to be considered the most inspired rock lyric ever recorded"  So 'A-wop-bom-a-loo-mop-a-lomp-bom-bom' it is…
Continuing with last week's dance theme, this 1956 high quality video footage shows dancing really is for everyone, of all shapes and sizes. 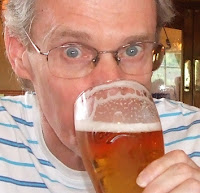 Fuller's pub spotted near the Tower of London called "THE HUNG DRAWN AND QUARTERED". Brilliant name and perfect for this location.


Steeped in history there are a number of nods to the past, with a noose hanging from the bar, a portrait of Henry VIII (who looks as though he has been sampling Fuller's ale and pies rather too often) and a spiral staircase leads one down to the dungeon (WCs). 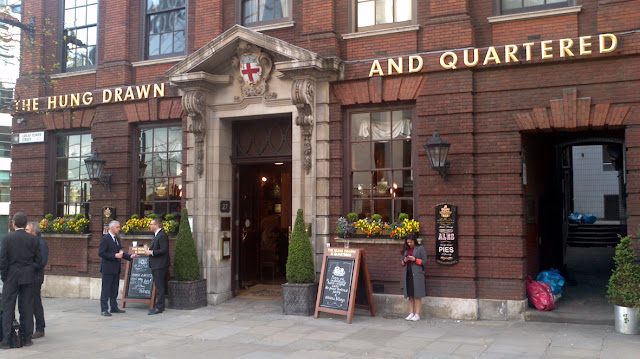 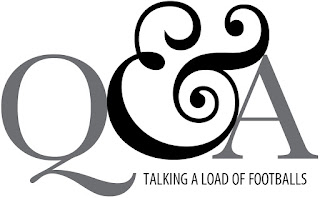 As the football season hots up with just four weeks remaining it's high drama wherever you look. And more questions than answers.

Going back to last Thursday's Europa league game at Anfield. Did anyone notice Liverpool moved their injury time free-kick in-field some 8yds (should have been by the touch-line), before taking it and scoring their winning goal against Borussia Dortmund ?

This was the collective verdict after the Leicester v West Ham 2-2 draw. "Every ball into the box > handball >  every contact in the box, foul > cheat? > penalty > it's very hard to be a ref"
Some key moments illustrated left.

It is only going to get more tense I feel.

And then the FA make matters worse by charging Jamie Vardy with improper conduct after being sent off. Rather than understand his disappointment at the decision, given the circumstances – after all we're all human, right ! 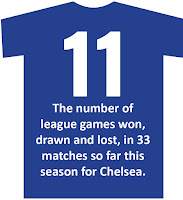 Chelsea however lost at home again, without even scoring. That's 5 home wins all season. Disappointing !
Posted by mandb at 15:21 No comments:

Looking at yesterday's Top Twenty chart I noticed the last four tracks I've posted are all at least 40 years old. Time therefore to get a bit more up-to-date.
Most of my  STAR TRACKS  are blasts from the past. Some more past than others, this is one of the others. Though surprisingly this is now 10 years old…! Referred to as 'The Treadmill Video' my kids use to play this at the time. Kerrang magazine delivered weekly, Tv tuned to Scuzz, 'Guitar-Hero' on the Playstation, the house buzzing with music.
This brilliant video won the Most Creative Video award on YouTube in 2006, so full screen best for this one. 'Here It Goes Again' by OK Go.
Treadmill… and action

For more info on the video see: https://en.wikipedia.org/wiki/Here_It_Goes_Again
The band have recently made a new video, some say is better. Take a look and decide for yourself: https://www.youtube.com/watch?v=u1ZB_rGFyeU

Having reached the significant number of 20 since 'The Friday Music Spot' started back in November, I thought it a good time to review and post a Top Twenty. If you had created an iTunes playlist of all tracks this is what it would look like. 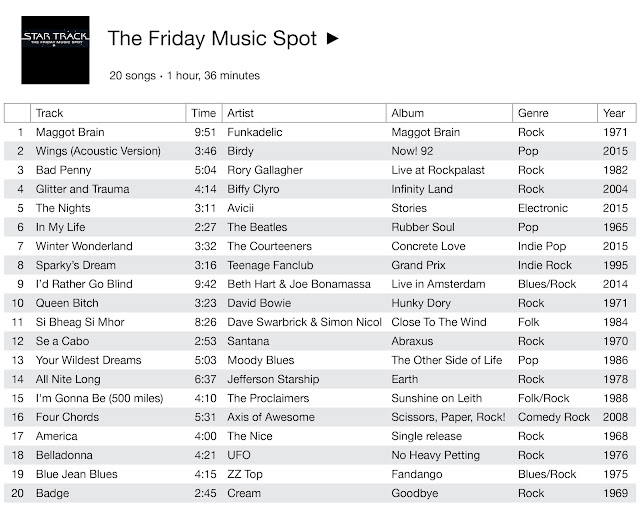 With Vietnam using the Roman alphabet there was plenty of signs everywhere in numerous and various typefaces. Interesting to notice 'Arnold Bocklyn' used so often. While this photo taken of a sign in the Cafe Giang in Hanoi, goes a bit overboard and is more of a type synopsis than a readable sign. 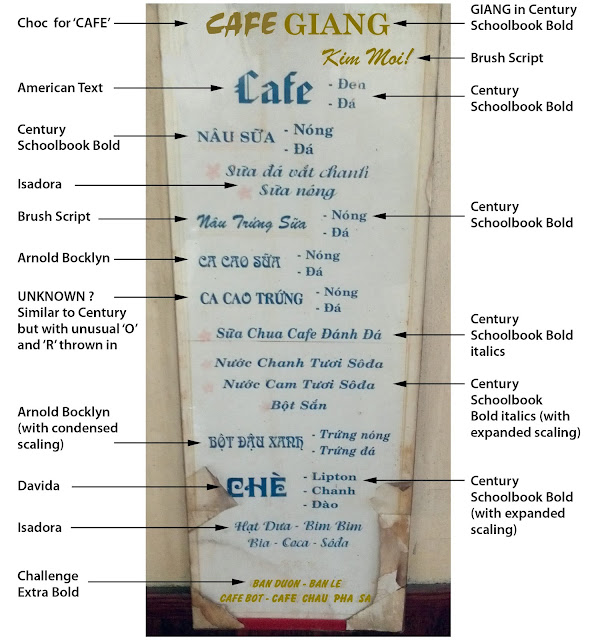 I count 9 different typefaces plus 3 types of scaling. And there are only 75 words in total. Bit crazy!

Monday: View from the Top 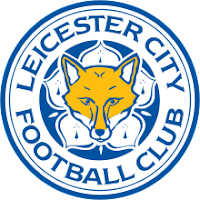 Apart from Tottenham fans and possibly Arsenal and Man City, is there any football followers not wanting Leicester to be Premiership Champions ?
Five games to go, nine points the target.

As for Chelsea, any sort of European football next season now looks increasingly unlikely, after 1-0 defeat at Swansea.
Plenty of work for the new manager coming in, Antonio Conte, to do.
Posted by mandb at 15:51 No comments:

The idea for 'The Friday Music Spot' was to deliberately recreate the call that went up every Friday afternoon "that the weekend starts here". As the end of the working week fast approached, the iTunes player was cranked up and we got well and truly in the mood with our playlist of favourites.
As this has been a bit of a 'working-week' nostalgically I thought it high time I replayed one of those much loved favourites. No introduction really necessary, it's 'Badge' by Cream. "Thinking' 'bout the times…"

To go back for a second week to the 'Funky Monkey' music hour* might seem indulgent > and it is!
But if you wondered how good the music was here's another great track - and not your typical ZZ Top guitar get-down and boogie, staple on a beard of your choice, that you might expect. I'd not heard this before: 'Blue Jean Blues'. Take it away - nice and slow now, ZZ