③:
Now here's another track off the 'Rockin' the Blues' CD and someone else I'd never heard of previously.
Ronnie Baker Brooks with 'Times Have Changed'. Nothing remains the same as this ends featuring Al Kapone rapping us out.
Different >

Robert Plant was on the bill at the London Blues Fest last Friday. And he's on my bill too. This is from a band needing no introduction with their take on the Sonny Boy Williamson song written by Willie Dixon. Taken from Led Zeppelin II - this is 'Bring It On Home' - eases in real slow but you know it's gonna kick sooner or later...

Opening the show with a track that appeared on the 'Rockin' the Blues' CD we have Gary Hoey with 'Dust and Bones'. Taken from his album of the same name there's no video I'm afraid because I chose this as the sound was far better than other postings.

Earlier this year I picked up a 'Classic Rock' magazine with a free CD titled 'Rockin' the Blues'. I didn't really listen to it for months... then I did and discovered Quinn Sullivan.
Not exactly a best kept secret - Quinn Sullivan won't be 20 years old until next March - he appeared on the 'Ellen Show' at age 6, two years later he played on stage with Buddy Guy and various impressive performances have followed. Here he is from this year 'Live' from Daryl's House performing his version of Eric Clapton's 'Let It Rain'.

Impressed ? Then check out 'Midnight Highway' and 'Buffalo Nickel'.


>>> 'Rockin' the Blues' and this week's STAR TRACK provides an introduction to something I'm going to try. Taking place over this weekend at London's O2 is the 2018 Blues Fest. I'm all for cross over... but looking at the line up it doesn't seem terribly Bluesy to me.
So, as I've been accumulating some great blues/rock tracks for a while now, courtesy of the afore mentioned CD and various Joe Bonamassa email-outs, I've decided to have my own Blues Week.
Starting this coming Monday check out a 'track-a-day' all week - or if you prefer binge at the end of the week, on the whole show. 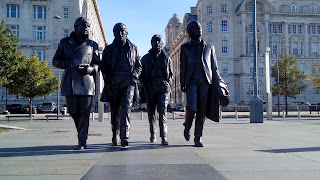 Last week I was in Liverpool with The Beatles.
Went to the resurrected Cavern Club, did the Bus Tour (Penny Lane/Strawberry Field etc.) sang along to Beatles songs and walked around The Beatles Story exhibition. So how do you pick one record from the experience ?
Well one phrase keep popping into my head - "When We Was Fab", the title of a George Harrison song from 1987. Deliberately nostalgic and capturing the psychedelic sound of 1967 it was written by George with Jeff Lynne. I particularly like the sitar/transcendental mediation/hindu god fade-out on this fab video.

Did you spot ELO's Jeff Lynne, Elton John, the Letraset* FAB lettering and the Apple Core ?

Come fly away. A new advert currently airing for 'easyJet' has caught my eye > www.youtube.com/watch?v=omlMFFHlEuM

When I first heard it I thought I recognised the music. As I'm sure you possibly do too. 'Dreams' is the song title. But to give it it's original full title 'All I Have to Do is Dream' I think gives it away. The original was by The Everly Brothers in 1958, this is Charlyn Marie "Chan" Marshall, better known, thankfully, by her stage name Cat Power with her version of the song, from the 'easyJet' ad.


Mad Man ! As by some commerical coincidence Deliveroo are also running an ad on TV right now using the Everly Brothers version: www.youtube.com/watch?v=2f4u6HbH5xY

I've managed to come up with a double connection for this week's Star Track.
Sky Arts channel have been showing the CNN 'Soundtracks: Songs that Defined History' 8-part series released last year. As you'd expect it's an American view of 20th Century history involving Civil Rights; Vietnam; 9/11; Katrina; Berlin Wall; Space Race etc. Many poignant moments remembered by certain songs and it gives me an excuse to repeat a quote, I like, by Kix Brooks (of Brooks & Dunn) who says:
"I don't know if music can really change the world. But it certainly gives us a real powerful spirit while we're doing our best to do so."

From the 'Berlin Wall' programme there was the German band Scorpions who wrote a song in 1990 celebrating glasnost and the end of the Cold War. It has a guitar sound similar to that of Pink Floyd on 'The Wall', which might be deliberate as the video does show a snippet of 'The Wall' concert. The song topped the charts in Germany and across Europe and peaked at number four in the US in August 1991 and number two in the UK and to date has over 616 million views on YouTube.
The Berlin Wall came down in June 1990. Scorpions 'Wind of Change' taken from the album 'Crazy World' was released in November, one month after my son Scott was born - who's birthday it is today.

Ever heard of a 'Hang' ? (or Handpan)
Interestingly I encountered this instrument almost 10 years ago in Barcelona, coming across a guy playing one in the Park Guell. Very atmospheric in the surroundings and a CD was purchased called 'Vibrational Relaxation Music'.
Then recently I saw ad for a concert featuring Hang Massive: who are Danny Cudd and Markus Offbeat and discovered this video. Would do wonders as a tourist promotion for Ladakh in Northern India. This is called "The Secret Kissing of the Sun and Moon"... relax and enjoy


A bit more... ?
Because then I found this guy Loris Lombardo who takes it to another level - one man band style - handpan, tabla, kanjira, shaker, darbuka and konnakol. Track called 'Aramir' > www.youtube.com/watch?v=b5KoOI-dIi4