As previously mentioned the idea for my Friday Music Spot was to recreate the practise whereby every Friday afternoon at work we’d get in the mood for the weekend by cranking up the volume and playing a selection of favourite tracks.
As this week I have found myself back in the studio - though not exactly as it was - and as this maybe my swan song (my last gig) - I thought one of my old boss’s favourites would be a good choice. "Suite: Judy Blue Eyes" he’d shout and on it would go… well he was the boss, after all !

The original song is early Crosby, Stills & Nash from 1969, but this video is Live from the New Universal Amphitheatre, Los Angeles in 1982 > Stephen Stills is quite extraordinary and those harmonies …. amazing !

DVD of the concert: info at http://www.allmusic.com/album/daylight-again-video-dvd-mw0000934217

Welcome to another instalment in the ongoing series entitled "How did I get to this?"
It starts with me seeing a newspaper ad for Joe Bonamassa and a FREE album download at www.jbonamassa.com  > I checked it out and a 12 track selection of his music, spanning some 15 years came my way for free. (Still available as of today).
One of the tracks called 'One of These Days' was credited to Joe Bonamassa and Alvin Lee! It's his 2007 take of the Ten Years After song, written by Alvin Lee, that opens their 1971 LP 'A Space in Time' - which I have. And which I probably haven't played in over 40 years !
It has turned out to be one of life's little RE-discoveries. It's Ten Years After's 6th studio album and less 'heavy' than previous releases with acoustic and psychedelic elements mixing it with their blues rock. Among the many great tracks is "I'd Love To Change The World". Early 70s sentiment that still remains relevant today & sounds like Led Zeppelin meets Lynyrd Skynyrd…

A driveway, running a hundred meters and leading to a farm had a 3 meter strip bordering a field of wheat, full of wild flowers. Stunning !
Posted by mandb at 11:31 No comments:

Shared on Facebook earlier this week was this version of the Guns N' Roses song 'Sweet Child o' mine'. Slightly renamed to express the crossover influence and marriage of Eastern music meeting Western Rock. It features Carnatic guitar maestro Baiju Dharmajan and the vocals of Girish Pradhan.
The videos demonstrating his slide guitar technique are great to watch as is my pick for this week's track. Composed by Baiju for his 2012 album called 'The Crossover', this is 'Philia'. Love the video (of his Southern Indian home) and the fantastic LP cover illustration (below). 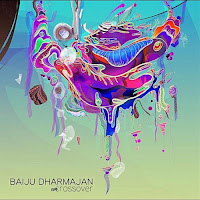 Don't miss the 'Sweet Indian Child o' Mine' video as it really does display the Indian sound of the music. As does this amazing version of 'Mile Sur Mera Tumhara' - a famous Indian tune composed nearly 30 years ago to promote national integration and unity in diversity.
Posted by mandb at 08:30 No comments:

Various breweries and styles, available from Aldi at 99p a 33cl bottle. The American IPA and Red Rye a recommended pairing.


(Left): Wild Bill's IPA (appropriately) > tastes like Lidl's Green Gecko use to taste. Available in Aldi at £1.19 in a half litre bottle.


(Right): Alhambra Litre bottle of lager, great value at €1 – but you'll have to go to Southern Spain to buy it at this price.

Great story in last weekend's Times all about its editorial by William Rees-Mogg, the paper's editor, who 50 years ago had unexpectedly come to the aid of the "strutting bad-boy of rock 'n' roll – Mike Jagger.
The article is not available in full (without registration) - but these links give an outline @ BBC and the National Post.
The Times story re-told the situation, the party, the trail and the night in jail while reminded us that "in 1967 the Rolling Stones and their lead singer were seen by many as a genuine threat to society, civilisation and morality, a sexual rebel with his thick-lipped mouthings and corybantic contortions". Indeed ?
Rees-Mogg had argued that "Mr Jagger was not treated exactly the same as anyone else". And the article closed with: "Up until that moment, most of the media had painted the Rolling Stones, and Jagger in particular, in diabolical colours. The Times reflected the changing times, by showing sympathy for the Devil".
My brother was always the big Rolling Stones fan when I was growing up. He had the singles and LP's. I would discover these great 'B' sides of singles that were very different to their well known hits and almost provide a kind of commentary to the story surrounding the drug trail and conviction in 1967. Songs like "Play with Fire", "As Tears Go By" and this "The Singer Not The Song". This was the flip-side of the UK release "Get Off Of My Cloud" > in the US it was changed to "Sad Day".
The video shows a very young Mick Jagger, who now is Sir Michael Philip Jagger but still that singer. It's Only Rock 'n' Roll, but I like it.

This is classic though - same song on YouTube - but the maker of the video has put the 45 on the wrong speed !  We've all been there….
Posted by mandb at 11:26 No comments: