By way of a follow on from last week and as explained the 'Bill's Kids' CDs were "mostly their favourites plus a few similar tracks of mine" - there's being the likes of Andrew W.K., Good Charlotte, Foo Fighters, Green Day, Saliva, Blink 182 etc. etc. Mine more White Stripes, Chilli Peppers, Muse, AC/DC and Ash. So here's one of mine by Ash. This track turned up on BK5... 'Burn Baby Burn' >>>


There's a curious official video for this song featuring cheerleaders and basket ball players leaping all over the place, I've picked this instead, that offers all the teenage angst lyrics...

On our recent flight to California the on-board entertainment system wasn't working. For 12 hours we sat with none of the usual distractions to pass the time. We didn't see one film (even on my first long haul flight to California there were two films shown to everyone on board). But these days we travel with our own personal entertainment gadgets, so for almost half the flight I was attached to my smart phone and listening to music. 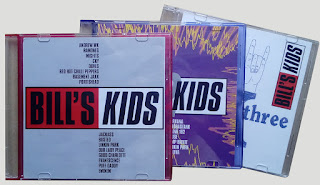 Having not done this for awhile, I wasn't sure what tunes I had on there....
And maybe because my kids who came on many an American adventure with me, I found myself playing a lot of their music. The 25 year old in me coming out again as I'd forgotten how much of their music I really liked: I use to make these CD compilations called 'Bill's Kids'*, containing mostly their favourites plus a few similar tracks of mine (see three pictured left.)
Bit of a long haul introduction this but I am getting there, promise...
Anyway Andrew W.K. was the first artist featured on the first CD. One of life's best teenage philosophers his songs and lyrics where no nonsense affairs. 'We Want Fun', 'It's Time To Party', 'Party Hard', 'Fun Night', the message was clear. No video to watch, so headphones on, volume set to 11 - this is a typical chunk of 'jackass' hard-rock from the 2001 album 'I Get Wet' called "Got To Do It" -

"Gotta do all the stuff that you love"


* Actually I made eight different CDs during this time. Not quite the collection managed by 'Now That's What I Call Music', the biggest-selling compilation series in the world, that reaches No.100 today. Amazing achievement, but 'Now 'Bill's Kids' is what I call music !

Seems The Beatles are still very big in America.
In California they have their own dedicated radio station, while digital music and video streaming service 'Pandora' (like Spotify, Soundcloud or Deezer) but only available in the US has a playlist called 'Imagine' - mellow rock instrumentation, folk influences, etc. playing 70s Beatles, Eagles, Creedence Clearwater Revival, Fleetwood Mac... you get the idea.
While this service was playing one evening a track came on: '100 Years' - Battle For Everything, it told me. Turns out it's actually by Five for Fighting, the song a US hit single from 2003 (did nothing in the UK) off an album called 'The Battle For Everything'.
Five For Fighting are basically Los Angeles born John Ondrasik. '100 Years' sits neatly within the 'Imagine' playlist, the lyrics and the piano melody.


I chose this video because it has old cine film footage of both Scotland and London and a glimpse of the 'Red Arrows' for good measure.

I think this definitely qualifies as alternative. I recently heard a nice jazz version of Coldplay's 'Viva La Vida'. Along side this on the same YouTube page was listed a ukulele instrumental version. Instantly I thought, no surely not, sounds awful. But I couldn't help but check it out. And guess what ? It's quite something.
Using a loop pedal, Hawaiian Kalei Gamiao has been at the forefront of today’s ukulele revolution since 2008. See what you make of this >


If you're uked-out here's that jazz version instead click: www.youtube.com/watch?v=_rQ6d-E-Rbs

BEERS 'BORN IN THE USA'

On a recent educational to the West Coast of America I was introduced to a number of new words in the ever expanding vocabulary of the brewery world. (Or maybe that should read bleary world, depending on the percentage of alcohol content involved.)
Roughly in some order of discovery, there was 'Little Sumpin' from Lagunitas, handed to me by Gary on the very first evening. And I never looked back from there.
It should be stated I was already a big fan of new world hops (Cascade, Centennial & Columbus and other west coast varieties) that give the American IPA beers their hoppy flavours.
The Lagunitas* brewery was up the road from San Francisco at Petaluma in Sonoma County, home to hundreds of wineries you've mostly not heard of - the more well known Napa Valley is slightly to the East - but I've strayed off liquids already!
A different kind of Zymology (or Zymurgy: ' the workings of fermentation') a completely new term I was unfamiliar with and the name of the AHA "American Homebrewers Association" Magazine (more on that soon and tales of Pliny #.) 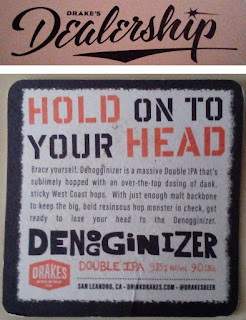 The next libation to intoxicate me was at the Drake's Dealership in Oakland, a former Dodge car dealership turned brewery where I was well and truly 'Denogginized'. Let me explain: Drake's Double IPA on draft is advertised as a hop monster and to brace yourself and "Hold on to your head"! And at 9.75% avb. it did blow mine, or at least two glasses did !

With my head back on straight stories of people queuing to sample beers at the Russian River brewery in Santa Rosa proved true, we didn't get in, so all I can do is tell you about their 'Pliny the Elder' Double IPA, voted the best beer in America by Zymurgy magazine, 7 out of the last 9 years.
A Roman author and naturalist:-
Pliny, the man, lived in the first century 23 to 79 A.D. According to brewing references, he and his contemporaries either created the botanical name or at least wrote about Lupus Salictarius, or hops, currently known as Humulus Lupulus.
He died at the eruption of Mt Vesuvius, witnessed by his son, Pliny the Younger. And that's the name Russian River has given to their once a year, Triple IPA (10.25%) that sees drinkers queuing around the block to get their 10oz glass (with a maximum of 3 per person) of this very limited and sought after beer. 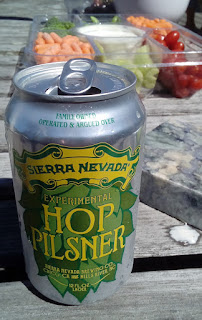 Not much to say after this: there was an Old Saloon bar in Point Reyes Station with draft 'Sumpin' and an authentic half timber English pub at Muir Beach called the "Pelican Inn". Also the Sierra Nevada Brew Company took my notice with their selection of brews and the beer can pictured (right) that informs the brewery has been family owned, operated and argued over !
Cheers

*Lagunitas is owned by Heineken International and is available in the UK. The others may be more difficult to track down.

A few suggestions for people's favourite LPs came in. Gratefully received - 'Hunky Dory' and 'Seals and Crofts' (albeit by the Isley Bros) have been tracked previously by me (click for Bowie here).
So this week I am picking the opening track off the 1970 album 'Tea for the Tillerman' by Cat Stevens. My personal favourite LP of his was 'Teaser and the Firecat' but this song is definitely one of his best and is still relevant nearly 50 years on.
"Where Do The Children Play" Cat Stevens