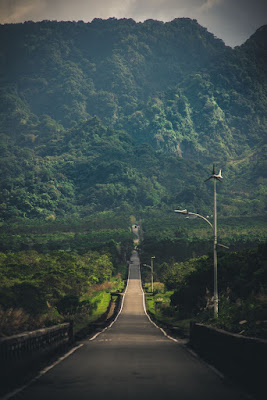 Scott sent me a picture recently of a trip him and Issie had just done in Taiwan. Describing the scenery along the east coast between Hualien and Taitung as 'out of this world'. I needed to consult my atlas for where in the world ?
Outside of the capital Taipei I knew nothing of Taiwan. Appears the coastal area between these places is flat, ideal for cycling with a backdrop of 10,000 feet mountains.

Visit http://www.mytravelmap.tk and enter in all the places in the world you have been. It'll guide you but larger countries are broken into states or provinces. For the United States for example you have to actually pick the state you've visited. Same for India and Australia, while South Africa is just one country region.
People often say to me 'you've been everywhere'. Far from it as my travel map informs me I've only explored 13.31% of the world.
See below, to see how: 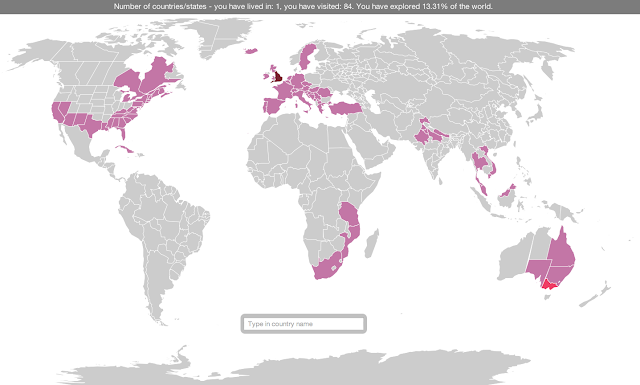 Watching the tv highlights of the game from Turf Moor last Saturday between Burnley and Man City I was intrigued by the incredibly long shadows cast by the midday sun in Lancashire.
The Bob Lord Stand put half the pitch in shadow, while the players in sun looked 15 feet tall. Weird.

A few days ago I went to see Beth Hart in concert at the Royal Festival Hall. "Now we've had Beth Hart before" on the  MUSIC SPOT  - I heard you shout. Brilliant concert, she really was amazing and played so much great music during an emotional and exciting performance and tempting though it is to post any of the night's songs, I'll stick with tradition of the no repeat guarantee.
However I'm not straying far from blues/rock, so how about something from the late-great Gary Moore, here in a tribute concert from 2005 for the late-great Phil Lynott.
As he informs us there were two versions of this song, written by Phil. One slow and the better known single version. 'Don't Believe a Word' !

Not entirely without coincidence this weekend marks 40 years since this single was released by Thin Lizzy. It also had an excellent 'B' side called 'Old Flame' > well worth a listen:
https://www.youtube.com/watch?v=tnaFRxsnfIU

Beer of the Month 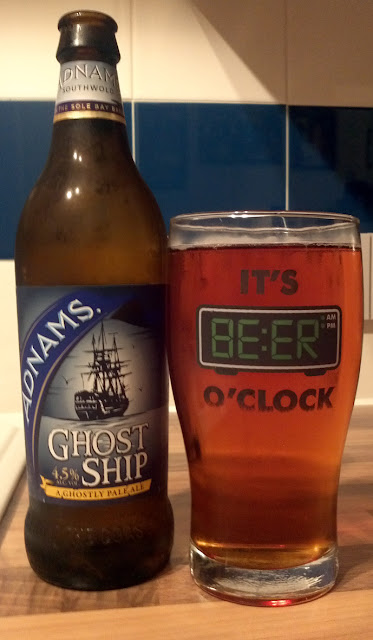 A number of Sport's Number Ones to mention this week.

Andy No.1 in the world of men's singles tennis and Jamie No.1 in the doubles. Congratulations.

Who with Mark Cavendish won the Ghent Six-Day event. (In his home town, having been born in Belgium). Maybe not quite yet his last race….

Celebration of the week 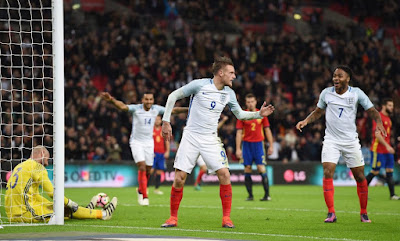 Goes to Jamie Vardy scoring for England against Spain with his mannequin celebration. Made better by the way Theo Walcott and Raheem Sterling instantly joined in.

A lot was made of Arsene Wenger having never beaten Jose Mourinho in a league game. Arsenal's late equaliser against Manchester United, and the draw took this run to 12. But…
Is this a record…?  Sir Alex Ferguson enjoyed 17 games without defeat against his former defender Steve Bruce, but here's a surprise. Ex-West Ham, Spurs and Portsmouth boss Harry Redknapp also went 17 Premier League matches without being on the losing side against Martin O'Neill.
Dare I mention one final No.1? - Antonio Conte's Chelsea, top of the league. No one's getting carried away by this, not the fans and, more importantly, certainly not the players.
Posted by mandb at 10:10 No comments:

I've had this video song sitting in my TBC pending tray (desktop) for simply ages. Being rather 'off beat' may explain it's reluctance to finally make an appearance on the FRIDAY MUSIC SPOT.
Released a few years ago, and as one review put it: "this is a great video. Mostly because it involves several bouts of incongruous choreography, in a Van! Rows of semi-detached 'Council' brick houses are the anywhere-British vista, out of the vehicle's window. Meanwhile the music is surging indie-pop."
From the group's debut album titled 'The Balcony' the track's called 'Fallout' and is by Catfish and the Bottlemen, (I'm not making this up, honest).


There's another slightly unreal video from the band right here.  Do not adjust your set.

After these strange goings-on hopefully normal service will resume, next week…

My TOP 50 chart from last week resulted in a few track suggestions being emailed > Paul Rodgers > Free or Bad Company > was something like the train of thought I believe. Happy to oblige, as I found this video which kind of hits both cymbals.
It's Bad Company playing Free's 'Wishing Well', giving it some twin lead guitar.


For those purists, here's the original Free version with Paul Kossoff on guitar: https://www.youtube.com/watch?v=LLSAGnHNqGc

Spotted in a coffee shop > PROCAFFINATING 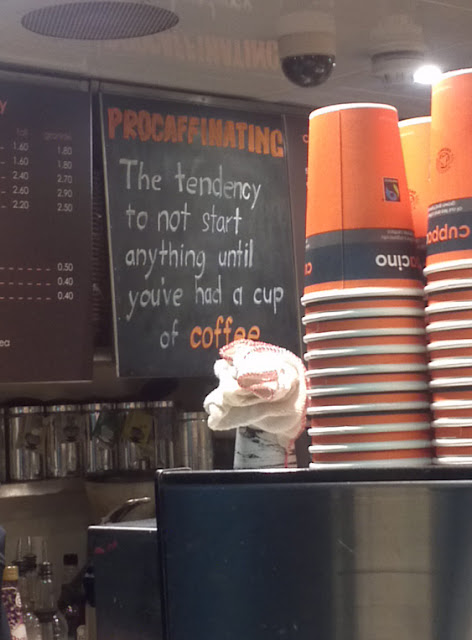 Fantastic performance by Chelsea yesterday in beating Everton 5-0. I'm breaking with tradition and posting this on a Sunday, partly because I'm still buzzing from this game but mostly because being top-of-the-league may only last until this afternoon when Arsenal and Liverpool play their weekend matches.
Old fans, new fans, singing along, we all had a great day out > Antonio, Antonio, Antonio !!!

Picture taken off the tv on Friday night. No.7 playing for Malaga in La Liga. The commentator called him Juan Carlos, so is this a nickname ? 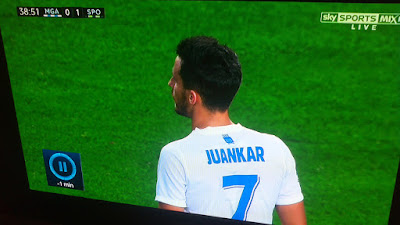 I'd never heard of a 'Cyr Wheel' until a few weeks ago.
It's a single large ring made of aluminium or steel with a diameter approximately 10 to 15 cm (4 to 6 in) taller than the performer. The performer stands inside the Cyr wheel and grasps its rim, causing it to roll and spin gyroscopically while performing acrobatic moves in and around the rotating wheel.

This amazing video, (Ft. Circusman Alexis) has a track by Jeremy Buck called 'Turn My Ship Around'. I'd not heard of him either but it turns out he's a 'Jack (or Jeremy) of all trades' as he wrote, produced, performed, engineered, and mixed the song, PLUS he also directed and edited the music video.
Best on Full Screen [   ]. You may get hypnotised by the spinning Cyr wheel as you watch. For your own safety please remain seated until the performance is over.


I wonder how many of his fingers got squashed before he mastered this activity ?

Top of the Spots

The  FRIDAY MUSIC SPOT  hits 50 and as promised a TOP 50 chart for your records.
If you want to listen to any of the tracks again simply click on the arrow (>) next to it.